4 Ways To Awaken & Strengthen Your Intuition

“How did you come to the realization that you’re such an intuitive person?” my friend, Erica, asked. I looked away and began staring at the wall, this thing I usually do when I think. Digging deep in my memories, I tried to remember the day I became aware that all the times I’ve heard myself say “I knew it. I could feel it in my spirit!” prior to that moment weren’t meaningless coincidences.

I couldn’t tell her when it was exactly. Honestly, I think I always knew that…I knew. I’ve always noticed there was something supernatural about me and the way that I think, which, I must say, has often left me feeling misunderstood and caused others to define me as an odd or lucky girl. (Odd, was for the times I detected a lie or ill-intentioned people before anyone else did and no one would believe my warnings. Lucky, was for the more playful times when following my intuition put me in the winner’s chair.)

With that said, there’s still a quite defining period of my life that’s helped me understand what that gut feeling really is, and that has also taught me that the reason it manifests itself is only for us to learn how to use it to our own advantage. Well, to be more accurate, it was a person, my first love, whom I stayed in a relationship with for nearly six years.

A little before I turned thirteen years old, this boy walked into my life carrying with him all the traumas, dramas, life lessons, and blessings in disguise I would’ve never thought I’d one day experience. I’ll spare the details, but he was a narcissist and pathological liar. I, on my end, was head over heels in love and curious to find out how far he could go with his compulsive lies, which explains the significant amount of time I’ve spent with him, trying to understand the way that his mind worked while being psychologically tormented by the fact that I couldn’t tell whether or not he behaved the way that he did because of me.

“I was so determined to understand his patterns,” I told Erica, “he became my case study. Everything that he did or said, his body language, I began analyzing everything. Not to mention the fact that I’m a Gemini and we’re known to be versatile and have adaptable personalities. I didn’t just dissect his layers, I also lived life through his lens. One twin was me, but the other morphed into him, which allowed us both to live inside the same mind. That’s how I uncovered his true colors. [And that’s what eventually brought my senses, especially my sixth sense, at peak sensitivity].”

As I continued to elaborate on my point, I had an aha moment. “You know, intuition is a sense that we all possess; some of us are just more in tune with our gut feelings than others. However, speaking with you, I realize that intuition is too often centered around the self when in reality, it should be centered around the world that surrounds us.”

What I mean by that is, by definition, intuition means: “The ability to acquire knowledge without proof, evidence, or conscious reasoning, or without understanding how the knowledge was acquired.” Simply put, it is the opposite of intellect. Nonetheless, I’m a firm believer that regardless of what the dictionary says, the awakening of our inner knowing relies heavily on our understanding of the outside world. It was only after I intentionally uncovered my ex’s patterns that I was able to recognize what my psychic responses to his behaviors were and therefore, to understand them. Only then have I become more inclined to trust those responses when they later manifested themselves in different situations and use them as a compass. Because I knew what they meant, it gave me clarity on the actions I needed to take.

That’s why intellect can’t be completely out of the equation when it comes to awakening your intuition. When the latter is still a locked part of yourself, your intelligence will give you the key to release it and let it guide you.

Now that I’ve made my point in this long introduction, here are 4 ways to awaken and strengthen your intuition.

Open yourself to spirituality

I’ve explained the major role your intelligence plays in the release of your intuition but you must understand that it’ll do just that. Intellect will ignite your intuition, open the gate to set the latter free, but that is it. It doesn’t alter the fact that being intuitive is a spiritual faculty. And with spirituality sometimes comes the unexplainable. When that happens, it’s important to keep unconditional faith in your gut feelings, even when facing situations or feeling things that you’ve never experienced before. That’s what real intuition is, after all. You see, you hear, you feel…you’re just being present and suddenly, you know. You’re not sure how, but you know.

There’s no need to worry about a lack of logic when your mode of operation has fully switched to intuitiveness. You’ll be able to navigate these moments just fine. Just listen and act according to the information you receive.

Observe and connect with your senses and emotions

Letting go of my main-character energy to become more of an observer is really how I strengthen my intuition in general. But what does becoming an observer mean? It means paying the closest attention to everything, every single detail, and occurrence, all while connecting with your senses and emotions at the same time.

Letting go of my main-character energy to become more of an observer is really how I strengthen my intuition in general.

My passion for writing also taught me that to succeed as an observer, you must live in a state of constant reflection and ask yourself a lot of questions. It’ll help you steer your focus on the right things. For example, asking yourself questions such as “What happens to my body when I can feel I’m in danger?” and “What exactly makes me feel in danger?” is key to pinpoint what danger means to you as well as to become capable of instantly recognizing it.

Moreover, connecting with your emotions and becoming more empathetic is a mandatory step in the awakening of your intuition. Sensitive people turn out to be super intuitive because they can feel energies and emotions deeper than any other individual. So, don’t just observe. Deepen the process by putting yourself in other people’s shoes. Understand who they are and what they’re going through.

Quiet the noise around you

When I wrote “Intuition is too often centered around the self,” I meant that when we try to understand or master our inner knowing, we’re too focused on what happens within us instead of around us. I’m thinking it’s probably because we often say “my intuition tells me,” which tends to make things about us, rather than “I have an intuition,” which makes the statement less personal. With that said, you can have an intuition, but that intuition must still be yours. Not anyone else’s. And for it to be yours, you must be able to hear your inner voice talk to you clearly, without being distracted by the noise around you.

How to do that? By practicing mindfulness. Turn off your electronic devices, indulge in solitude, meditate. If the noise sounds like other people doubting you, do whatever will help build up your self-confidence, like keeping a journal that recounts all the times you were right about stuff that your spirit could feel. Do what you want, but don’t let the muggles rip you off your magic.

Let your creativity guide you

Before Erica and I had this conversation and I decided it was worth writing about, I thought that intuition was a spiritual phenomenon that we can only feel, not see. However, while doing some research on the matter, I stumbled upon an article that made me realize there’s a way to see what intuition actually looks like, and that is by allowing your creativity to lead you to actual physical creation. For example, abstract art is the result of intuition. Some artists followed their intuition and happened to create straight masterpieces. This is probably how some of your favorite songs, tv shows, or even brands have been created as well. What I want to inspire you to do here is to surrender to both your creativity and intuition to see how successful it can make you.

Do you enjoy my content? Don’t forget to follow me on social media and subscribe to my weekly newsletter where I keep you updated on my latest posts, share book recommendations for the soul, journaling prompts, writing tips, and more. 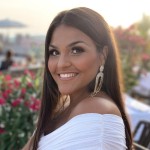 I Was Lost In The Journey To Becoming My Dream Self​

I'm Savannah, a multifaceted creative living in Belgium who loves to write and is passionate about all things manifestation + spirituality. I was born a dreamer, with the sun in Gemini, the moon in Pisces, and Virgo as my rising sign. My desire has always been to leave my mark on the world, so I created this blog hoping that its content inspires, elevates, and stimulates your mind. END_OF_DOCUMENT_TOKEN_TO_BE_REPLACED